Golf Scrambles: Rules, Set Up, and How to Win 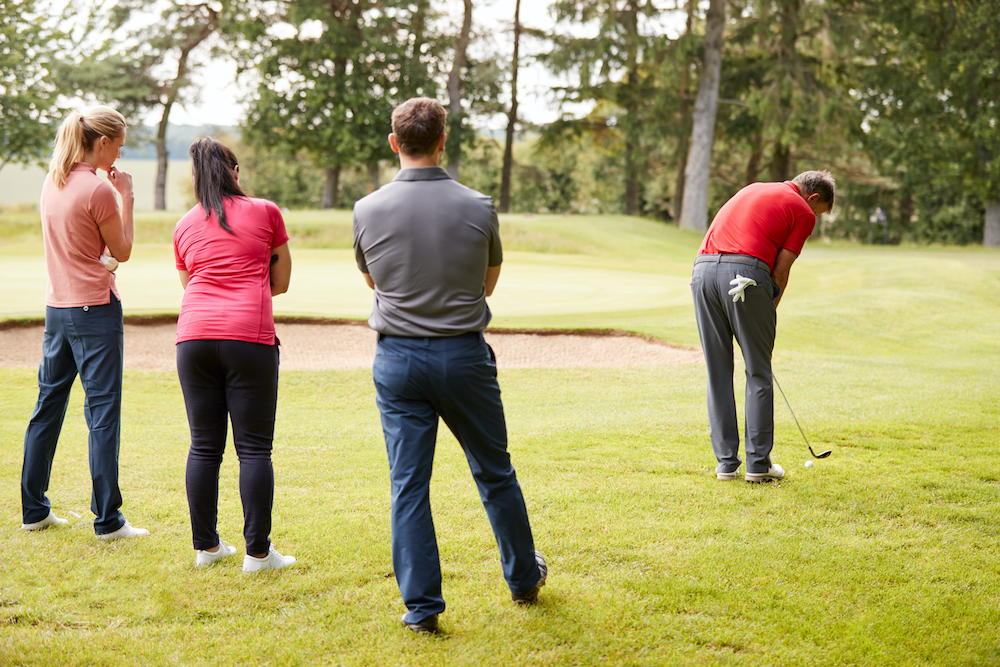 A scramble is one of the most common formats for golf tournaments. The game is played by a team of four players where each member hits their ball throughout the match. Team captains choose the best shot from the first stroke and use the same spot for each player. After completing one round, the team engages in another stroke where they select one location and play the balls from there. The process continues until all holes are completed.

The scramble golf format is common among charity events because of the relaxed rules and lack of pressure to achieve individual scores. Its rules of playing are also informal and modified based on the organizer’s wishes. In some cases, the scramble match can involve allowing players to perform two tee shots due to the informal rules. This means golf scramble does not have an official format covered by the official golf rules.

The Rules for Playing Golf Scramble

The players are allowed to improve their lie by one club length through the green, except hazards. In cases the team’s best shot falls on a hazard such as sand or water, they are forced to play from the location without moving. This means a player cannot enjoy the one club length advantage when the ball dropped in a hazard.

During the tournament, all four members of a team start by teeing off on each hole before deciding on the best tee through a consensus. The captain often decides on the best shot, which mostly entails the longest dive on the fairway. After determining the spot for the second stroke, it is marked for visibility.

Each golfer will then hit his ball from one chosen place and proceed likewise until the lowest score for the hole is achieved. The process will then begin anew on the next hole until the end of the round with score determined by hitting the hole.

Only one ball, and thus one score counts per hole for each team. The best score for each hole is added up before determining the rating of a scramble team from the total of the best shots. The team with the lowest total score for the round wins the gold scramble tournament.

If teams have a tie from the scramble gold, the organizers draw a random hole number and use a team’s lowest score in that hole to determine the winner. For example, hole number 6 can be drawn to break the tie. In case the score is still tied, then tournament organizers will call for progression from that hole until a tie is broken. Players can speed play in Scramble by playing for Bogey.

Choosing the right playing order is essential in scramble golfing. Since the best player may not be best at all phases of the game, setting up the playing orders helps get the best result. If a team wants to win a golf Scramble, the strategy is to allow weaker players to hit first while the best putter plays last for every single green. This is because if the first three miss, a team still has a better putter to play last.

Secondly, when choosing which ball to hit during our approach shots, always choose the ball with the best lie and view to the hole. Scramble game is defined by getting to the green in the least amount of strokes. Golfers whose drive was selected to be hit should be first on the second shot to cater to their confidence.

A scramble team consists of great putters, others who are good off the tee, and one who is the best in the group. The team should have a player who hits a long ball and another who hits accurately. In most cases, the most accurate player should go first and put the ball in the fairway. The longest hitter then goes last as there is less pressure to hit the ball, and the players who need the most help improving their tee shots wedged in the middle. The forward tees and long balls get a team closer to a lower score and win the tournament.

This variation involves golfers whose ball was selected after each stroke to sit out the following stroke. Therefore, one member of a team skips each stroke played except in each hole's drive.

This variation is a 4-team format that involves the use of a 6-sided die. A roll of the dice is used on each hole during the round to determine which member's drive will be used on that hole.

In this variation of Scramble, there is a combination of Scramble and best ball. The game starts with gofers playing a scramble off the team. From that point on, then every player is for himself into the hole.

This variation of the Scramble is when a scramble is combined with a team handicap, which means you play using net scores based on a handicap for your team.

Choosing the right format for the golf tournament can make or break a golf event. In most cases, a match decides to play a scramble golf format to speed up the pace of play, especially when high handicap players are invited. As such, the form is set up by event organizers to be less intimidating and welcoming to golfers of all skill levels.

Therefore, this format is embraced by casual golfers who do not have to play a full round using their balls. As such, those who are keener or with good handicaps may find the game unfortunate, since their odds of winning the tournament are diminished because the golfers are alone in contributing to the team's effort.

The scramble format is best suited for fields composed of novices and groups that feature non-golfers. It is also appropriate for charity or fundraising functions by providing the facade of content yet keeping the breezy atmosphere. Therefore, when organizing a golf scramble tournament, it is crucial to consider each team's makeup and ensure it has at least one good golfer to provide organizations with a constant flow of good shots.